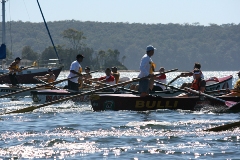 The Navy George Bass Surf Boat Marathon has kicked off with a flying start in Batemans Bay on Sunday morning.

More than 1500 people crowded jetties, the bridge and shoreline to watch the 15th George Bass Marathon kick off.

This year’s marathon is set to make history, with men and women crews competing in every single leg of the 180km event.

There was some very close racing in the open men’s division with crews from Tathra, Narooma, Pambula, Canberra, Bulli, Burnie (Tasmania), Port Kembla, Broulee, North Steyne, Batemans Bay and Moruya battling it out.

"It was very competitive in the open men’s, Burni from Tasmania held the lead to the end of the river mouth before being overtaken by the Canberra Vikings," he said.

"The Vikings held on to the lead for much of the race until one of their oars broke."

"They were then overtaken by Batemans Bay who battled out with North Steyne to take out the first leg."

"It was very competitive and great to see." 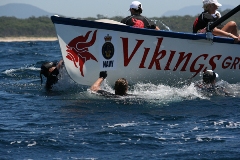 The Royal Australian Navy came on board as major sponsors of this year’s race, and feel there is a very close connection to the marathon and the navy according to Rod Harrod, Director Personnel.

"This is a very positive relationship between both organisations," he said.

"What the George Bass stands for is very special to us, George Bass and his crew of naval officers sailed the coast of Australia in a whaling boat in 1798 and we are quite proud to be involved in an event in his memory," he said.

"George Bass would have sailed the coastline at around the same time of year as the marathon, both surf life saving and the navy have fit young men and women and have a big emphasis on team work so it is quite fitting that we get involved."

Mr Harrod said he was very pleased with the launch. 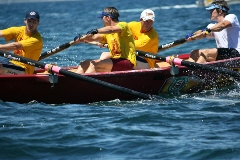 "It was just outstanding and fantastic to se so many people involved and come along to witness the spectacle."

"These sort of things don’t just happen and without the solid teamwork involved it wouldn’t have gotten off the ground."

He said he looking forward to seeing how the week’s racing unfolds.

Racing continues tomorrow with the Moruya to Tuross sprint leg of 19 kilometres. First race leaves at 9am from the Moruya Surf Club.

All winning times on day one are new race records.

More in this category: « 2009-2010 ASRL Committee Nominee Profiles Congratulations to all Aussies 2009 finalists! »