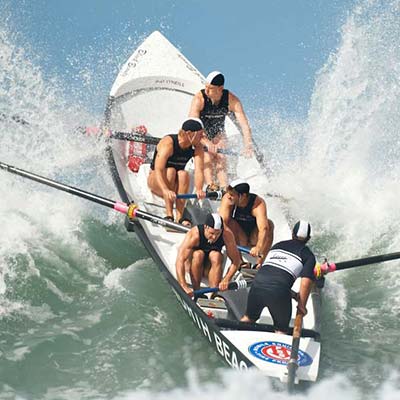 There’s something uniquely Australian in the image of a boat crew, the sweep in control at the stern, batting their way though huge breakers to rescue a hapless swimmer fighting the rip. When a swimmer is in trouble too far beyond the break to be reached by a lifesaver attached to a belt and reel the boat went out. Likewise if rescues had to be made around a rocky headland - maybe a fisherman had been swept into the sea - it was a job for the surfboat.

The introduction of inflatable rescue boats many that the surfboat was no longer deemed a rescue craft. But intense regional, state and national SLSC boat competition and the incredible commitment and enthusiasm of thousands of participants, and in recent years a massive increase in female crew members, has kept this challenging and thrilling sport alive.

In fact, it’s booming; boaties are a culture within the SLSC culture. They have had the reputation as the hard men of the SLSC. But they are also the butt of dumb jokes. There’s an old line about recruiting boat crews. To pick a crew, club members are lined up and have house bricks thrown at them. The ones that don’t duck are selected to row. And for some reason the surfboat crews have always been associated with the larrikin element of the clubhouse.

Nevertheless, the top crews are elite sportsmen. Surfboat racing is a serious business. The sport has always been progressive. Brute strength helps, but it doesn’t rule. Technique is vital and has often been a connection between the surfboat rowing scene and flat water scullers. Many Australian crews had recognised the benefits of weight training, good diet and the no alcohol edict long before they were common to other sports. If crews want to be genuinely competitive, they’ll be training many afternoons after work and spending their weekends travelling to carnivals, and this is still supposed to be an amateur game.

Surfboat competition is known to have begun in NSW in the early 1900’s. Initially, the surf boat craft was developed as a rescue vehicle, however today, Surfboats are more commonly associated with inter-club competitions and the most spectacular footage of all Surf Life Saving competition, particularly when the swells are large.

Crew members must be volunteer Surf Life Savers to compete. The rowing discipline commands a high level of fitness, commitment and skill. It complements the core set of competencies volunteer surf life savers must possess in order to obtain the Bronze Medallion qualification and patrol beaches. Competitions typically commence during November and run through until March. During this period, competitions take place at a local, state and national level, culminating at the National Titles in late March.

The domain of Surfboats, like Surf Life Saving was one initially dominated by males, however, growth in recent years can be attributed to the influx of female competitors, who row the same size and weight craft as male competitors. 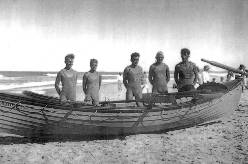 Although there is still argument over the claims of both Bondi and Bronte as to which was the original surf lifesaving club, there is no dispute over the origins of our great sport. The first boat race in the surf was held during the Manly Surf Club Carnival in January 1908, using boats borrowed from ships in the harbour. The winners were Little Coogee (Clovelly). More formalised racing came a few years later but the story of the development of surfboats to what we know now is one of trial and error, and boat captains looking for any advantage in design and training. This, of course, has led to the exasperation of every club treasurer since. In 1920, the North Steyne committee weren’t keen on the gift of their first boat because of the expense other clubs were experiencing.

There have been a few significantly different periods in the development of surfboats, this piece covering only the fledgling period from the turn of the century until the mid-twenties. Boats in the surf was not a new concept, fishermen had been doing it all over the world for millennia, usually with a type of sweep oar. Egyptian tomb paintings show rowers and sweep oars, the ancient Greek triremes three tiers of rowers, although most weren’t all that keen on their situation or sweep. St Brendan the Navigator, in the sixth century sailed and rowed a leather covered boat, a currach, not much larger than the one in your boatshed from Ireland to (allegedly) the Americas, with a sweep oar. Whalers plundered the natural resources of the Pacific armed with not much more than a surf boat-sized craft and a harpoon, then sat back to enjoy the Nantucket Sleigh ride and hope the whale s didn’t head to the deep. The tradition of the Royal National Lifeboat Institute and their long history of heroic rescues under appalling conditions are also well known. So by the start of this century there was already a wealth of knowledge and tradition regarding small boats in open water. 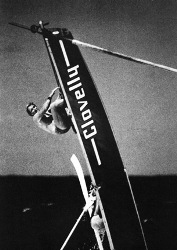 In fact it was fishermen from Fairy Bower, Manly, the Sly family, who had become the first unofficial lifesavers for the increasing numbers of bathers now frequenting the Manly beaches. The Slys used a double ended ship’s boat, purchased from the Quarantine station at North Head, adapting it more to their needs by cutting off part of the stern. The boat was loaned to the Manly club for rescue and patrol work but the limitations of the cumbersome, slow craft became apparent. The newly formed Manly Lifesaving Club and its new boat captain Fred Notting set to the task of designing a boat suitable to the local conditions. This had been tried earlier, by Walter Biddell, a cashed up innovator at Bronte. He came up with, and more importantly financed, a new surfboat, The Albatross for the Bronte Brigades in 1907. The boat, crewed by three rowers and a sweep, disappeared after the break up of the Brigades in 1909. So, Fred ended up with a Norwegian design, a rough-water working boat and even better got the council to pay for it. The new MLSC certainly caught the eye, at twenty feet long, double ended and an exaggerated spring in the keel, banana-boat, fitted it perfectly. Notting, as a youngster in his canoe, had used a quarter-bar to gain leverage to keep it straight on a wave. He included this development in his banana-boat, and worked on techniques to manage the boat in surf. Launched on December 13th 1913, the boys headed straight around to Freshie to show it off.

The development of surfboats and their adoption as essential pieces of lifesaving equipment was boosted by a rescue off Dee Why on the 22nd of February, 1914.The day after Dee Why's first surf carnival, twelve swimmers were washed out to sea, all but two youths quickly bought in. Several unsuccessful attempts were made to effect the rescue, (one beltman, H. Lingard, dragged out three lines, about 600 metres) but the two continued on their way out past Long Reef. Jack Taylor (DY) and H.Duckworth (Maroubra) jumped into a ten foot long fishing dinghy and took it out through the difficult break. Rowing and bailing they made it to the two patients, one now unconscious, picked them up and slowly made their way back in. The small boat eventually succumbed to the surf, but close enough to wash in. The event was fortunately observed by several Warringah Shire Councillors. The council then setting aside 1250 Pounds ($2500) to provide gear and accommodation for the five clubs already in the shire, Freshwater, Dee Why, Collaroy, (Nth) Narrabeen, and Newport .Gear, of course, meant in part boats and the five were built by W. Holmes of Lavender Bay for the sum of 135 Pounds ($270) - the lot! Fred Notting’s banana boat formed the basis of the design, although the new boats were two feet shorter at eighteen feet with a beam of five foot six. Being shorter, with only three thwarts (seats), the two strokes sat side by side. Boaties being as they are, the tubby, clinker- built hulls were soon pressed into competition. The first purpose- built surf boat race was held, with six boats, at the Freshwater Surf Carnival in 1915.

Freshie were the guns until the early twenties. Led by their colourful sweep, "Big Dick" Mathieson they held sway over their contemporaries, especially when there was a bit of a lump on. On one celebrated day at Newcastle in 1920, they were the only crew to finish, cracking a wave perilously close to the rocks. North Steyne, reluctantly at first, accepted a boat from Manly Council in 1920.Not having much of an idea, they coaxed "BIG Dick" over from Freshie to teach them the fundamentals. Mathieson, task finished and as self interested as most sweeps since, took the four best Steyne rowers with him back to Freshie. This left the young Harold Rastus Evans as boat captain and within the year a mixture of enthusiasm, Innovation and dedication saw Rastus win his first championship, and Nth Steyne’s second. These were the days of one turning bouy, no chance of getting the dud end then. All sorts of shenanigans, mostly illegal were undertaken to gain an advantage, more often than not ending up in a fairly willing stink on the beach or the pub.

Also at this stage there were no specifications, boats varying in length from the early 18's, a touch longer for the Johnny Walker boats (donated by J.W. distillers) to 22's for the home-made boats at Nth Narrabeen. These three boats, all named Barracouta, were built by Charlie Proudfoot, amateur shipwright and fulltime sweep. A few feet longer, the third Barracouta was the first boat with four thwarts, spreading the rowers evenly through the boat. The beam had come down to a fairly standard 53. It was North Steyne’s second boat, built by Watty Ford at Berry’s Bay that set the standard for the next generation of boats. The carvel-built, cedar hull was lighter and more ‘hydronamically’ efficient than the usual kauri and clinker hulls. The spring in the keel also straightened for better flat water performance, it was the end of the banana boat. To raise money for the new winner, Evans ran the usual dances and fundraisers, he also instituted a club Boat Fund to which all members contributed sixpence (5c) a week. As all members were being regularly stung, the secretary suggested the boat be christened Bluebottle. In it the club won four of the next five championships.

Design and development continued until the war, sweeps and boat builders looking for that little bit of an edge, but the basic design echoed the revolutionary Bluebottle - until the boys from Swansea turned up with their tuck-stern boats in the early fifties.