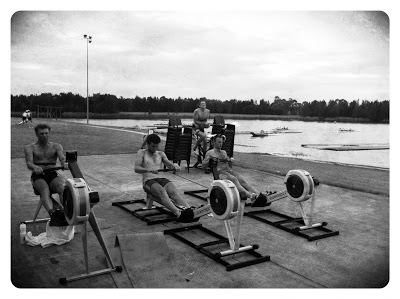 It is my firm belief that the Ergo should be a rowers best friend. I know that an ergo doesn't float, and that a rower can be a lot better or a more effective rower in the boat than on an ergo (and I know this as I have rowed with a number of rowers like this myself). BUT, I still believe that an ergo is an invaluable training tool for a surf boat rower.

The reason I think an ergo is such a great tool is specificity. Performing the movement pattern that you are going to be doing in a race is really the ONLY way to train. (I know there are other factors and I will address them in other sections!). It isn't always possible to have all five crew members available and ready to spend time in the boat. If this was possible, then that is great, but often conditions, work, family and other commitments don't allow for this. So training outside of the boat needs to be done. As training time if often limited, this time should be spent as specifically as possible. And ergo rowing is as specific as you can get for a surf boat rower (out of the boat of course).

The answer to these questions in a resounding DEPENDS!

It depends on the time in the season, the previous training level of the rower and of course what other sessions are being done (in and out of the boat).

Training in general can be split into two general categories; aerobic and anaerobic.

This is the LONG stuff where the body works at a level that is sustainable for long periods of time. Since the energy being used is derived from the burning of oxygen and stored glycogen (or even fats), there are few toxic by-products and as long as the energy sources are available then the activity can go on indefinitely.

This is the shorter more intense efforts. When the body starts to work above what is known as the anaerobic threshold (the point at where the anaerobic system is required to provide energy) the stored energy used in this system is used up and there is a build up of toxins in the body that will ultimately limit performance.

As hard as it may first seem, the minimum time you should be spending on an ergo is 30min a session. This doesn't have to be 30min in one effort or without getting up to stretch for a minute or so, but the work load should be a minimum of half an hour. Hopefully as you become fitter and more used to the sessions, 30min will feel like a simple warm up.

A good rule of thumb for base aerobic training is to do it at a "conversational" pace. Do the workload at a level where if there was someone next to you on the ergo, you could hold a conversation with them.

Here are some examples of some base aerobic training sessions for the ergo:

There are thousands of variations on ergo sessions that can be done and many of them fall within the anaerobic category. Some of them I will give below and some info about what their purpose is.