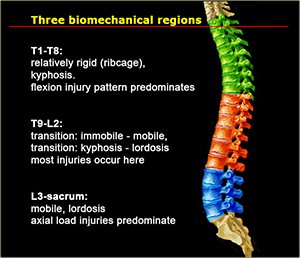 Inappropriate technique in rowing can lead to injury and pain within the low back. Fatigued states of the erector muscles of the spine can be a contributing factor to increases in flexion and extension movements of the lower back, as these muscles help regulate the bending motion of the spine. Studies have found that within these fatigued states, the muscles allow the lower back to move through a large range of motion. During rowing movements, particularly during the drive phase, the spine almost reaches full flexion. It has been shown that this loss of lumbo-­‐pelvic control through flexion movements can result in injury as the same amount of force is produced in the spine when injury occurs while lifting. Furthermore, the stress placed upon the spine rises as flexion increases and approaches end range.

Later research in spine mechanics showed that rather than stopping flexion moments in the spine, the erectors (i.e. Longissimus, iliocostalis and multifidus) are more responsible for reducing anterior shear (or forward sliding) forces, by producing posterior (backward) forces. Not only will fatigue reduce the effectiveness of these muscles, but as flexion increases, the stimulation of stretch receptors within these muscles will cause an inhibitory reflex, further decreasing active control.

It has been shown that repetitive motion of the spine under load leads to soft and hard tissue injury (e.g. disc herniation's, ligamentous sprain and vertebral fracture). It has also been found that a full flexion of the spine has substantially compromised its ability to withstand compressive loads. When we consider these factors in conjunction with our knowledge of the fatigued states of lower spinal muscles, we can see that the potential for injury within the lower back is quite large.

However, motion about the hips is the sparing factor for the spine. Mike Boyle, in his book, explains that the hips were designed for mobility, while the spine was designed for stability. When the joint that is mobile becomes immobile, the stable joint is forced to move through extra range of motion. The stable joint has now become unstable, leading to pain and injury. Focusing on a normal hip flexion and extension range, passively, and throughout the rowing movement, will help to reduce the amount of motion performed by the lumbar spine, thus reducing risk of injury.

Rowing surfboats in particular has an increased risk of injury due to the increase of front end force generated at the catch, as a surfboat is heavier than riverboats for example. With this in mind it should be concluded that when coaching surfboat rowing that each athlete (and coach) should be aware the shear forces generated during the catch phase. Prevention through enhancing hip mobility and lower spine stability through specific exercises is a must to minimise risk of injury and to increase longevity of the athlete.

As each athlete is different, for specific exercises to prevent these injuries it is best that you consult your Exercise Physiologist or Physiotherapist.